My deployments and/or assignments include Nuba Mountains in central Sudan, Afghanistan, Iraq… 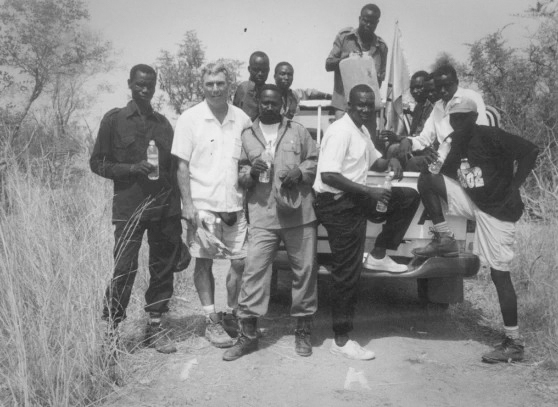 I have attended three (3) Pueblo Ingles week long training programs in Spain over the years beginning in 2007 and most recent June of 2016.

All the programs were excellent..well managed and all enjoyed the experience.

I am a former US Army Officer coming to Europe initially in support of post war issues in Bosnia and Croatia.  Spending near four (4) years in the Balkans, I came to know Europe well.  After leaving active duty, I remained in Europe purchasing a “piso” in the village of Comillas.

My deployments and/or assignments include Nuba Mountains in central Sudan (the picture if of my de-mining team with the mission to open overland access to starving Nubian population), Afghanistan, Iraq, back to now South Sudan..then into Uganda training the Ugandan People’s Defense Force/UPDF in preparation for an offensive in Somalia.

Most of the time since 2008 I resided in Comillas, Province of Cantabria, Spain.

I was out of my home country (USA) for nearly seventeen (17) years..how the world has changed.

Meeting many of the Spaniards was always an interesting experience with the emphasis on issues, challenges, and hope for the future like in all societies in the western world.

I most recently visited Cuba..and will be going back prior to summer.  My Volkswagen tdi Transporter (with Spanish plates) remains at the air base in Germany..and I will be back this summer for several months traveling around Europe to include Spain, Greece, Croatia, France, Germany ..and a few other roads “less” traveled.

Thank you for the opportunity to comment about Pueblo Ingles and the dedicated personnel who support the many programs.